The most interesting Warren Buffett Archive includes short video clips of the famous investor at various annual gatherings, and even one of his famed fireside chats at an Omaha coffee shop in his later years. The legendary interview with Omaha’s Jim Fitzgerald was documented by CBS News in the late 1980s, just before Buffett purchased the Enterprise. During the interview, Buffett explained the difference between being a “good” investor and an “elite” investor, and why the elite tended to be more risk adverse. He also discussed how the difference between an equity portfolio and a line of credit relates to being able to make money with real estate, and how he felt that the purchase of the Enterprise should have been a given, but that he nevertheless managed to get into a huge hole that nearly cost him his business. 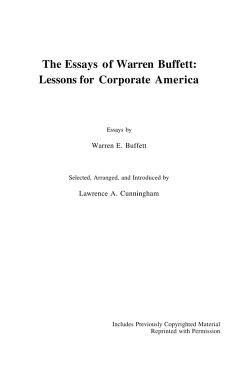 The two-minute video clip is accompanied by a lengthy transcript of the interview, along with more than two dozen close-up photographs of Buffett as he makes his famous claims, usually in terms of real estate investment. In addition, the archive allows users to access a multitude of other content, including correspondence between Buffett and other investors, correspondence with members of his staff, and an impressive array of other material. The footage is accompanied by a wide variety of voices, from multiple perspectives, as it allows the viewer to hear the legendary investor as he makes his famous claims. For example, one part of the footage features Buffett talking to an Omaha City Manager about the building of an apartment complex, and what he feels is the lack of quality housing currently available in Omaha. The voiceover indicates that Buffett is an individual who has “been there, seen it and done it all,” and the personal touch made by the spoken words allows the audience to feel closer to the celebrated investor.

One of the greatest features of the Buffett Archive is the searchable video clips. Searching by date, category, and location will allow the user to find videos that highlight each of the themes discussed in the annual meetings. As a bonus, the searchable video clips include the background music, spoken transitions, and other aesthetic embellishments, such as photographs of some of the other investors or staff.